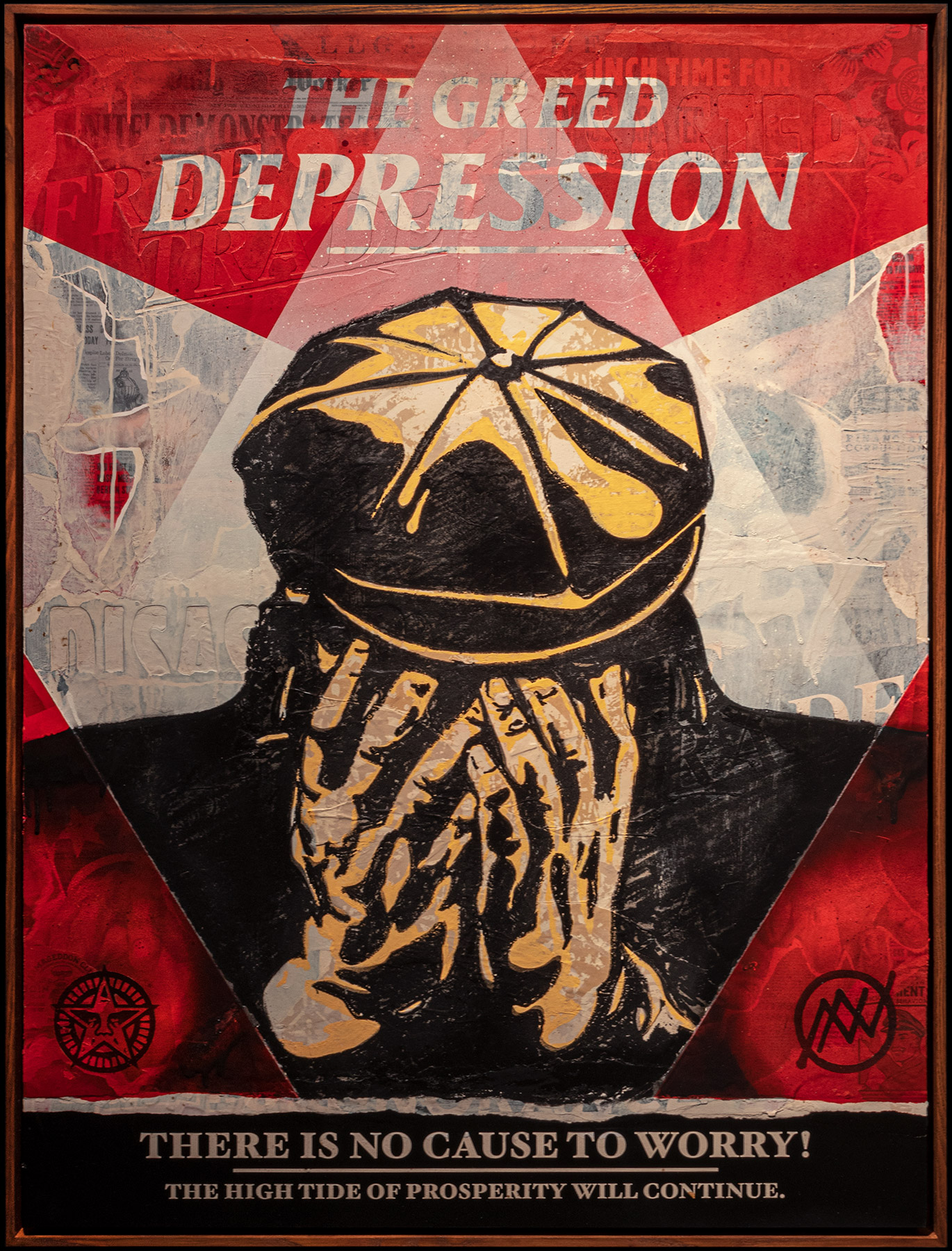 SHEPARD FAIREY x NoNAME / GREED DEPRESSION
(2020) industry marker, spraypaint, screenprint posters and stencil on canvas | 98 x 118cm
I was introduced to Georg Orwells novels back in the late 90's through my english teacher, an insignificant-looking sarcastic little man, who mantra-like implanted us the adage "use your common sense". Nearly one decade later I rediscovered Orwell's books - and thoughts - through the appealing cover layout design by the kindred spirit street art activist Shepard Fairey, who I'm glad to call a friend today for many years.

Shepard and I were discussing his illustration for "Down and Out" which he actually, for some reason, hadn't made as a painting or print edition yet. Due to the fact that Orwell's dystopian books were/are one of the leading inspirations for our philosophy and work, Shepard offered to team up and use the illustration for a collaboration.
Related to the illustration I was rembering a "spontenous" street intervention I made based on the word play "The Greed Depression", as reflection of a mood that you can notice in almost every wealthy place around the globe.
The idea behind the artwork is to examine the false promise that a neo-liberal capitalist system based on greed and ignorance gives equal possibilities and will provide wealth and prosperity to everyone in our society. In fact, this misbelief is especially devastating to the working class people whose hopes and dreams to participate and benefit from this unequal "game" are mainly ending up in a great depression. Public assets such as water, education, or human needs such as housing or a public health care, became an investment for speculators and an increasingly more unattainable luxury for just a few.
I strongly believe that we as human species are still able to change the direction of a train out of control that is racing toward a cliff, but we seriously should worry what happens if we don’t change direction!
WE PROMISE TO ONLY SEND YOU INFO ABOUT PROJECTS,
EXHIBITIONS AND RELEASES RELATED TO THE ARTIST.